Since there are several readers who have asked me about the Maldives and my accommodations during my stay there, I figured I would just do a proper review of the Conrad Maldives Rangali Island.  I have already made a post on the number of miles and points it took to book this trip and you can read about that here. The Maldives is one of the world’s premier beach destinations and there really isn’t any place like it. Crystal clear waters, an abundance of marine wildlife, and hospitality that is unparalleled regardless of the hotel you may choose. This particular Conrad is located on Rangali Island, an island that is part of the Alif Dhaal Atoll. The Maldives has 26 different atolls with some of them subdivided into two or three.

The only way to get to Rangali Island is via 45-minute seaplane flight on Transmaldivian Airways from the capital city of Male. The distance between the two islands is about 59 miles or 95 km.

Since my wife and I booked with Conrad,  our experience actually started upon landing at Velana International Airport in Male. The Conrad staff guided us to an exclusive Conrad Lounge as we waited for our seaplane to arrive. It’s very rare for a hotel to have a branded airport lounge and this was our first time experiencing one. The lounge was very spacious, had a decent selection of food and drinks, and was clean and well maintained. It also offered free Wi-Fi and couches that could be used as beds. It was much better than most airport lounges we’ve visited. 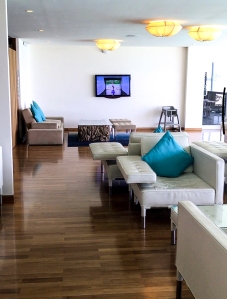 If you’ve had a long flight, this is a great place to recharge and freshen up 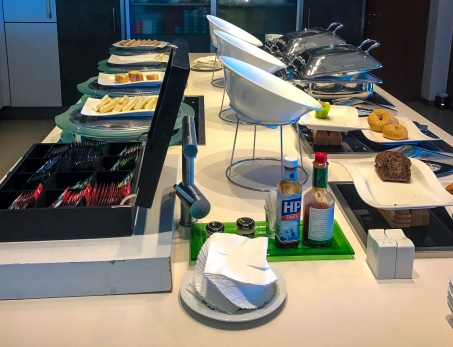 About 45 minutes later, our seaplane arrived and it was time to take the much-anticipated flight to Rangali Island.

I apologize for taking this video vertically.  The plane seats around 15 people and flies at an altitude of about 5,000 feet. You get some amazing views of the other atolls and islands on your way. It’s a loud flight due to the propellers but it was much smoother than I anticipated. Once we arrived, we boarded a golf cart that took us to our villa. The staff gave us a tour of the villa, the amenities, and explained to us in detail the services that they offer. We also found a complimentary bottle of sparkling grape juice and a fruit basket that had been left for us. You can see the video of our villa below.

Sorry again for the vertical video. Snapchat and Instagram have basically programmed me to do it this way.

As a Hilton Gold member, Conrad upgraded us from a water villa to a retreat water villa. The retreat water villa came with our own jacuzzi and also had a more private feel since the neighboring villas were several hundred feet away.  The villa itself was incredible. This property has won numerous awards including the best luxury resort in the world.  Each villa also included a private spa room with two massage tables. We didn’t use this service since all we wanted to do was be outside and soak in the sun. Each villa also has stairs which take you right into the water. I would estimate the depth to be around 7 feet right at the villas so if you don’t know how to swim, you might want to keep that in mind. It gets much shallower once you’re near the beach.

As Hilton Gold members, we were entitled to free breakfast, free afternoon tea at Mandhoo Spa Restaurant, and free cocktails/mocktails between 5-6pm. The breakfast had a large variety of options and I had something different every day. The afternoon tea at Mandhoo was more like a lunch since they also had sandwiches.  Purchasing meals at this property was quite pricey. I mean it is a Conrad Hotel after all.  To minimize meal costs, we would have breakfast at the latest possible time, around 10:30 am and then have the complimentary tea and lunch at Mandhoo Spa Restaurant at 4:30. Since this was pretty darn close to dinner time, we only utilized the Atoll Market for dinner once. Dinner can easily run past $120 a person so if that matters, it is something to beware of.   Conrad Maldives is also home to the Ithaa Undersea Restaurant. Unfortunately, all the daytime slots were reserved during our visit there and there was no point in making a reservation during the evening hours since you couldn’t see the marine wildlife.

Other Areas of Conrad Maldives

This property actually has a total of three islands. Two of them (Rangali and Rangalifinolhu) are used to for guests and a third is used only for employees. To get from one island to another, we just called the front desk and they sent a golf cart which got us from place to place. You can certainly walk the distance if you wanted to but it would take a solid 25-30 minutes. You will save a ton of time by using the gold cart below.

I didn’t measure the Wi-Fi speed in the villa but it was pretty fast and I had no issues with connectivity. They also have a fantastic business center within a lounge on the second floor in case you needed one. I only used it for a few minutes to print out some documents but it had everything you needed. If you’re a Mac person, they had those as well. Great job Conrad!

People have often asked what we did after sunset. We made it a point to go sleep by 8pm every day. Sunset was at 6:20pm so we woke up right at sunrise, around 6am, and made the most of our day. If you’re in a place like the Maldives, I’d strongly recommend waking up early and not sleeping in.  As far as activities, you can do excursions such as swimming with whale sharks or go scuba diving and jet skiing. If you’re used to paying a certain price for those activities, you will be paying double and triple that over here. Seeing the exorbitant costs, I just preferred to snorkel at the reef right off the island and swim in the waters right near my villa. If only they allowed to book excursions with miles. This Conrad also has two infinity pools, one on each island and all guests are allowed to use either. I took full advantage of that as well. 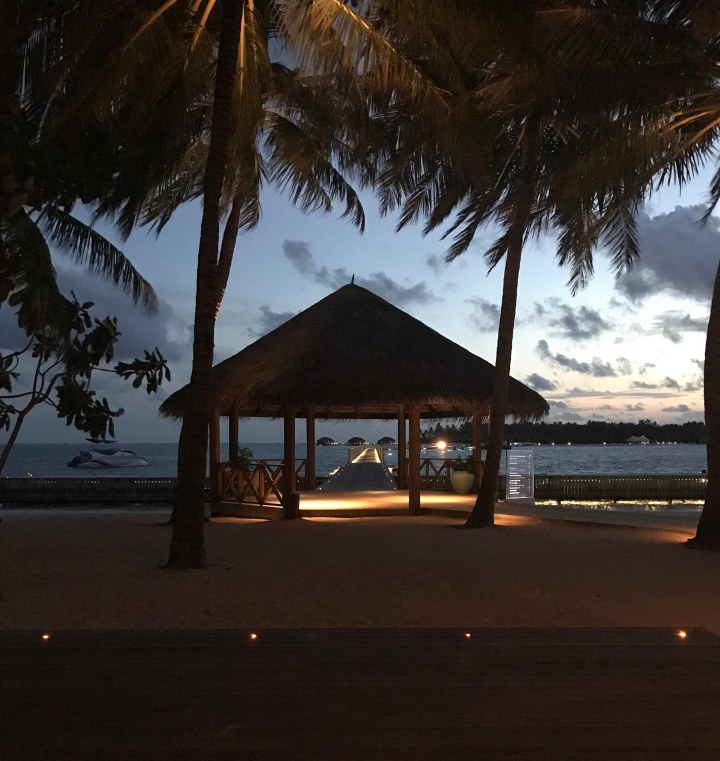 When I made this reservation, I informed them that my wife’s birthday would be on the second day of our stay there. They remembered and when we entered our room after breakfast during the second day, housekeeping left a nice little gesture.

To sum it all up, fantastic resort, pristine beaches, excellent food, excellent service, super friendly and helpful staff, and an experience that I hope I’m able to be a part of again in the future. If you do decide to book at Conrad Rangali Island, having the AMEX Hilton Surpass card or the AMEX Platinum card and the Gold status that comes along with it will take you a long way. I estimated that I got over $700 in value just by having the card.

Some of you have asked if you could take a speedboat rather than the seaplane to Rangali Island. From my understanding, the only way to get there is by seaplane. It’s way overpriced for what amounts to a 30-minute plane ride and unfortunately, if you don’t have miles that can be redeemed for cash (Chase Ultimate Rewards or AMEX Membership points), there really is no way around it. Transmaldivian Airways has a monopoly on this route so it probably won’t change anytime soon.  If the seaplane cost is a turnoff, keep in mind there are plenty of excellent hotels that only require a seaboat transfer from Male. The cost for that isn’t cheap either but it’ll save you about $500 for two people.

Cape Florida Lighthouse- Key Biscayne, Florida
The Cape Florida Lighthouse at Key Biscayne. Originally built in 1825 and decommissioned 32 years ago. It’s still a beauty and the hour before sunset is the best time to see it in my opinion
The Key West Lighthouse in Key West, FL. Over 100 years old and still looks beautiful.
Mama bear with two cubs following close behind at Great Smoky Mountains National Park
Fall colors along Foothills Parkway at Smoky Mountains National Park.
View of the Smoky Mountains from the North Carolina side Newfound Gap
Follow Miles for places on WordPress.com