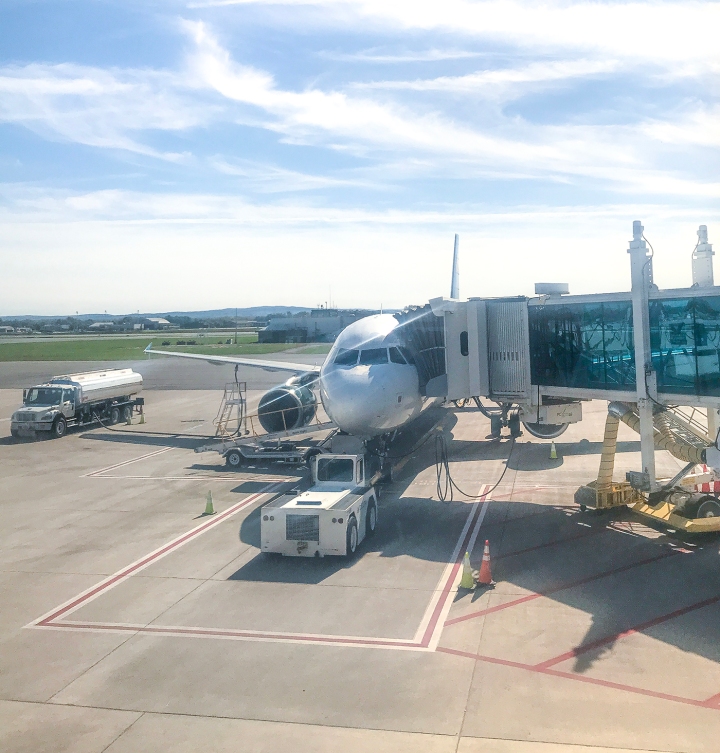 On a recent trip to Chicago which I had to book 10 days prior to departure, I lucked into one of those deeply discounted flash sales that Frontier Airlines has from time to time. I was able to score a one way ticket from Syracuse to Chicago (ORD) for $15. 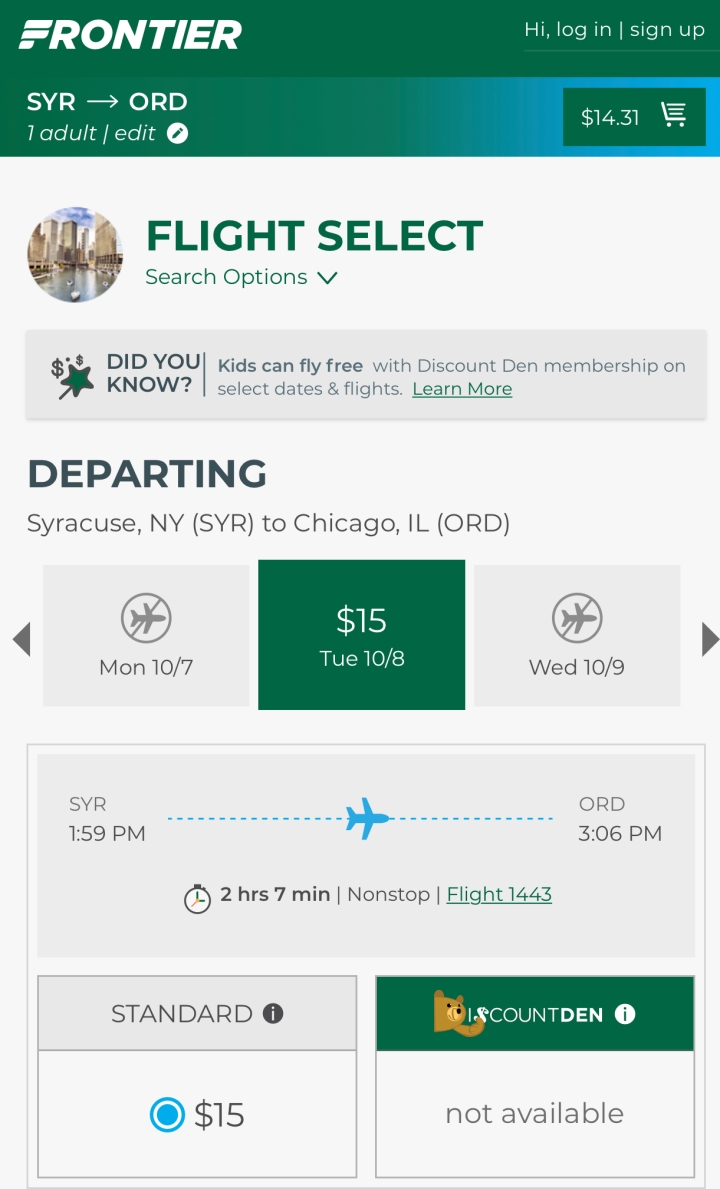 From Albany International Airport, a one way ticket was going for nearly $400. Even when I factored in the $31 Amtrak ticket from Albany to Syracuse and the $10 Lyft ride from the train station to the airport, the savings were very significant and hard to ignore. I used to be very averse to low-cost-carriers such as Spirit and Frontier because of their poor on-time performance and lack of suitable contingency plans if a flight was cancelled. Based on OAG’s data from June 2018-May 2019, Spirit has really improved their punctuality as they now rank fourth among U.S. carriers in on-time performance.

Frontier on the other hand is still struggling with on-time performance and I actually had to deal with a cancellation on a Frontier flight I took about two weeks after this one (they handled it very well and compensated me for my ticket on American Airlines). For $15, I just had to it. I mean that’s a ridiculously cheap price to get from point A to point B almost 700 miles away. Frontier was also the last of the major remaining U.S. carriers I had yet to fly on so this was also a great way to experience their product. 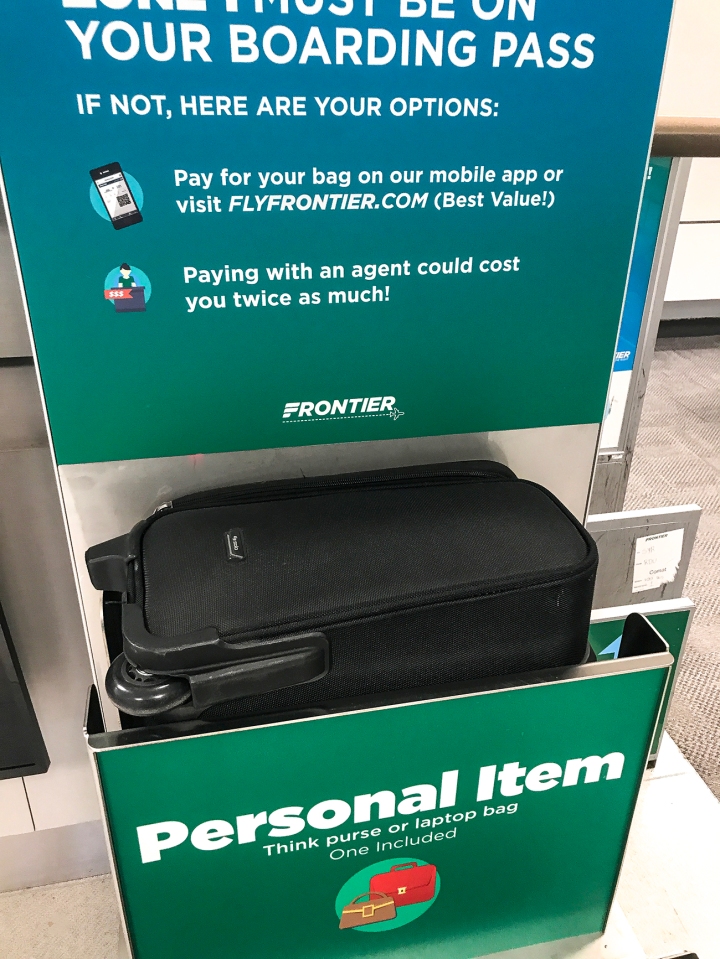 I used Frontier’s mobile app to check-in. The key with Frontier much like Spirit is knowing how their model works before flying. When you pay for your ticket, you are only entitled to the space under the seat in front of you. Carry-on bags cost $41 if you purchase in advance and $60 if you have to pay for it at the gate. This is the part where many people who have never flown on Frontier end up getting sticker shock. My bag fit comfortably under the seat and fit above with a little nudge to push it down. Checking in a bag costs $37 if paid for during booking, $40 if paid for during check-in, and $55 if paid for at the airport.  I was able to fit enough clothes for 3 days in the bag shown as well as my laptop in the laptop compartment. Another thing to keep in mind when flying on Frontier (especially when traveling with family) is that you can’t choose your seat assignment unless you pay. If you simply choose not to pay, Frontier will assign you a seat during mobile check-in.  This is similar to the basic economy structure on the larger carriers as well as Spirit Airlines.

Frontier boards their elite members, active military members, and customers in Zone 1 (customers who have paid for their carry-on bags) first. That’s followed by Zone’s 2, 3 and 4. During the boarding process, the gate agents will eyeball everyone’s personal item and if it looks too big to fit under the seat, they will have you put it in the bin to see if it fits (or mostly fits).

One of the beneficial aspects of having people pay for carry-on bags is that the boarding process flies by. Since people aren’t haggling for overhead bin space and attempting to stuff oversize bags in them,  most people find their seats and are seated rather quickly. The picture above illustrates this point perfectly. My flight had a lot of unused overhead bin space since most people are not going to pay $41 to carry on a bag. I’d guess the people that did bring in a carry-on bag were Frontier Airlines Credit Card holders who have a free carry-on as a perk.

As a low cost carrier, Frontier does not serve complimentary snacks on-board. They do serve complimentary Dasani water which is appreciated. They do have a variety of snacks and beverages for purchase. Another thing I noticed was their tray tables being very small. It certainly won’t hold a laptop and it’s just big enough to hold a large smart phone.

There is no online WiFi or in-flight seat-back entertainment so make sure you have your phones charged and have a movie downloaded prior to your flight. Frontier’s business model is cramming as many seats as they can onto their Airbus airplanes.  This means you won’t get a ton of leg space unless you pay extra for a “stretch seat” with additional pitch. The seats were thin but I did not find them to be uncomfortable for my flight.

My first time flying on Frontier was a good experience and it went about as I expected. If you do fly on Frontier, remember to sign up for their frequent flier program as there are a few benefits. First of all, Frontier awards miles based on distance flown rather than dollars spent. This means a really cheap transcontinental flight can earn you nearly 3,000 miles. A second benefit of their frequent flier program is no blackout dates. This becomes extremely valuable during peak travel times such as the Wednesday before Thanksgiving or the day before Christmas. Frontier prices these award tickets at 10k miles each way although I would assume there is probably a limited number of seats they allot for redemption. My only gripe about Frontier is their poor on-time performance and the bind it can put you in if your flight was cancelled. Since Frontier operates many routes just three or four times a week, a missed flight due to weather related issues could mean waiting two or three days to get to your destination. If a cancellation was due to their own shortcomings (mechanical, lack of a pilot, etc), they send you a link to book on a different airline and they reimburse you up to $400 to get to your destination. This happened during my second time flying Frontier but I was able to book with American for a flight that departed an hour later and it didn’t end up ruining my trip. If you absolutely have to get to a place on time, say for a wedding, a job interview, etc be aware that a weather related cancellation would yield you a refund or booking on a later Frontier flight. You would have to pay your own way to make it to your destination on time.

Hawaiian monk seal taking an afternoon nap on the beach at Hanauma Bay Nature Preserve
Sunrise at Makapuu Lighthouse in Oahu, Hawaii. Constructed in 1909 and still an active aid for navigation today. I woke up at 4:30am and got on the trail by 5:25am to get the sunrise and it was totally worth it. From my time in the Northeast, I became pretty fascinated with lighthouses and the history and stories behind them. An added bonus to see one in Hawaii.
Hanauma Bay- Oahu, Hawaii
Hanauma Bay Nature Preserve in Oahu. One of the best beaches in all of Hawaii.
Snorkeling in Hanauma Bay in Oahu about 200 yards off the coast. This is a protected nature preserve and has excellent water clarity and a beautiful beach which requires reservation 2 days in advance. Tickets go on sale at 7am and get sold out within minutes. The beach closes at 3pm and the parking lot closes soon thereafter. These measures have relieved overcrowding and give the ecosystem a chance to recover.
The lush green Ko’olau Mountain Range as seen from Nu’uanu Pali Lookout
Follow Miles for places on WordPress.com