On a recent trip to Chicago, I had an early morning flight out of LaGuardia Airport on Delta Airlines. Delta uses the majority of gates in Terminal C and also has two Sky Club lounges in this terminal. Since I find myself using American, United, or Southwest for most of my travels out of LGA, I’ve never had the opportunity to use a Delta Sky Club. Presented with an opportunity for this particular trip, I arrived earlier than usual so I can experience what they had to offer. As an AMEX Platinum credit card holder, I get complimentary access to Delta Sky Club lounges if I am booked on a Delta flight. Unfortunately, I can’t bring in a guest free of charge. They would have to pay the discounted rate of $29 if they were to accompany me.

Even though my flight was at 7:10 a.m. and I was there by 6:10 a.m., the lounge was certainly not as empty as I thought. I’d say about 30% of the lounge was filled up. There were pockets of empty spaces and it didn’t take much effort to find a desirable seat next to the window. Most of their seats have plug outlets and USB ports and if you want to sit facing the tarmac to watch airplanes land and take off, they have window-facing seats as well.

This particular Delta Sky Club was like one giant room with a pillar here or there that might act as a buffer for privacy but not much else. Compared to the Centurion Lounge in Terminal B which is my go-to lounge at LGA, this lounge was massive. I purposely didn’t have breakfast at home so I can sample the food at this lounge. 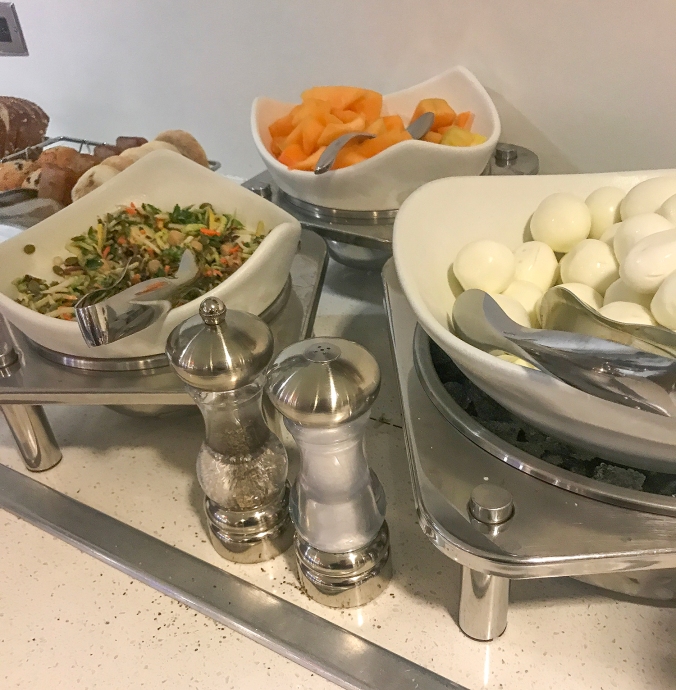 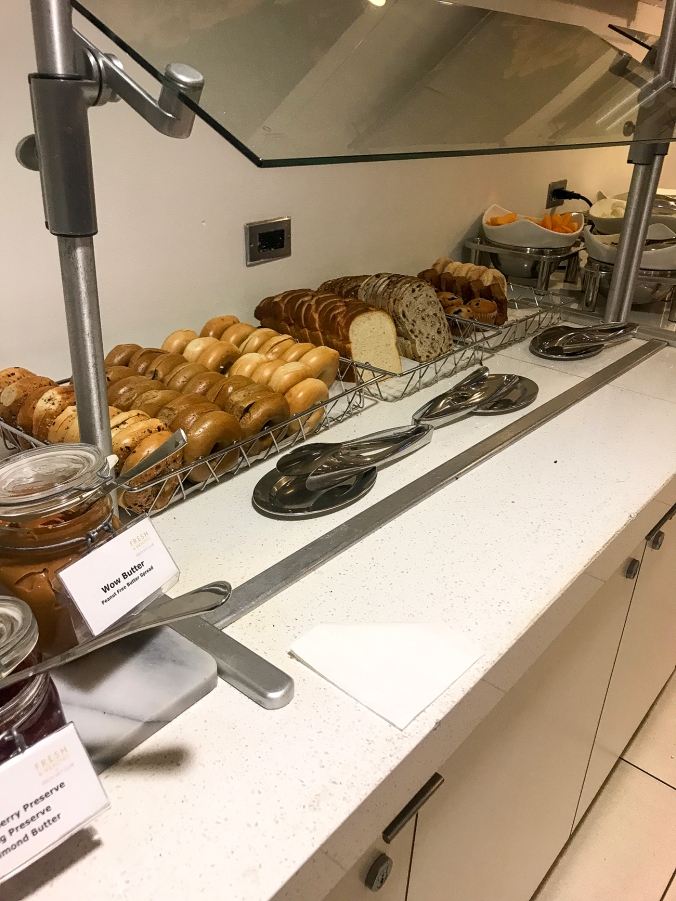 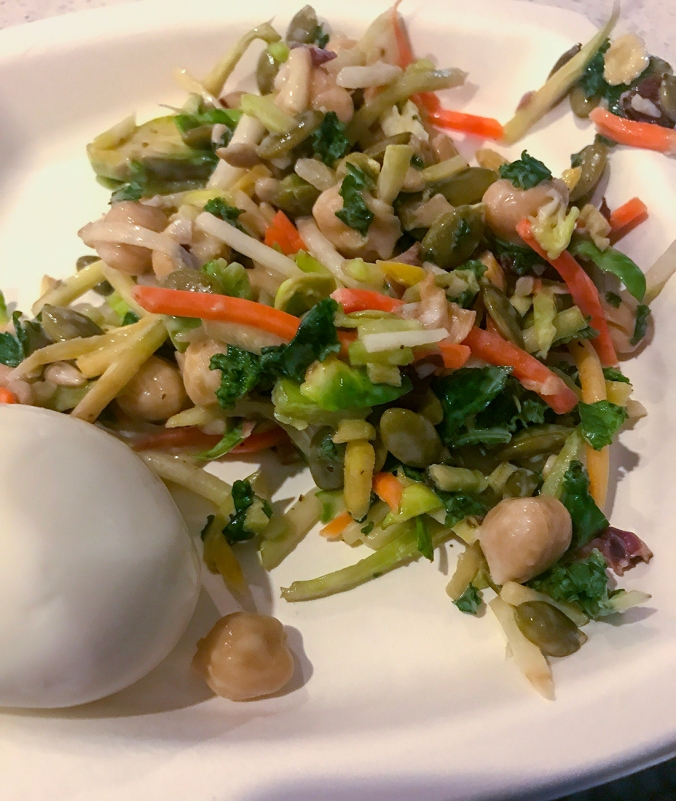 I had a bagel, chickpea salad, boiled egg, and some coffee. The chickpea salad was very good and flavorful. Certainly, something different to have in the morning if you’re not used to having a salad at 6:30 a.m. Since I got there early, their bagels were pretty fresh and seemed to be sourced locally. They had a variety of bread, bagels, and muffins among the bakery items. They also had a nice selection of cereal, parfait, and fruits. What they didn’t have were hot breakfast items that the Centurion Lounge is known for. I understand that there are some Sky Clubs that have this option and hopefully Delta brings hot breakfast to their NYC Sky Clubs soon. Their coffee was Starbucks Coffee and it tasted fine.

Delta Sky Club does not provide computers but they do have an area in the back of the lounge that has a printer and a semi-private area that has the daily newspapers. They certainly have the space to add a few desktops and it would enhance the lounge if they did.

This Delta Sky Club had the fastest internet speed I’ve tested at any lounge. This is perfect for business travelers and with the number of guests that fill the lounge during peak hours, their increased bandwidth serves them well.

Overall this was a pretty decent lounge. Delta could definitely improve certain aspects such as adding hot breakfast items, adding a couple of desktop computers, etc. If you need to spread out and get some work done, this is a decent place for that. As an AMEX Platinum credit card holder, would I recommend someone pay $29 to accompany me to this lounge? No, I would not. I would give this the nod over most United Clubs I have visited but it’s simply not at the level of a Centurion Lounge and it has a long way to go before it gets there. Since Terminals B and C are not physically connected at LaGuardia, you do have to take a shuttle between the two. The one advantage the Sky Club has is that it located past security unlike the Centurion Lounge. This removes the fear of having to deal with a long security line after exiting. I would rate this lounge a 3.8/5 with a strong potential to improve if Delta makes a few changes.